LIGO is the world’s largest gravitational wave observatory and a cutting edge physics experiment. Comprised of two enormous laser interferometers located thousands of kilometers apart, LIGO exploits the physical properties of light and of space itself to detect and understand the origins of gravitational waves.

Though it’s called an observatory, LIGO is unlike any other observatory on Earth. Ask someone to draw a picture of an observatory and odds are it will look something like the photo below: a typical telescope dome on a mountain-top. As a gravitational wave observatory, LIGO bears no resemblance to this whatsoever, as the photo of the LIGO Livingston intererometer at right clearly illustrates.

Although LIGO will search for gravitational waves from space, and it is called an “Observatory”, LIGO is not, strictly speaking, intended to be solely an astronomical facility. LIGO is truly a physics experiment on the scale and complexity of some of the world’s giant particle accelerators and nuclear physics laboratories. Though its mission is to detect gravitational waves from some of the most violent and energetic processes in the Universe, the data it will collect will have far-reaching effects on many areas of physics including gravitation, relativity, astrophysics, cosmology, particle physics, and nuclear physics.

Since LIGO has the word “Observatory” in it, however, it is helpful to first describe how it differs from the observatories that most people envision. Three things truly distinguish LIGO from an astronomical observatory: 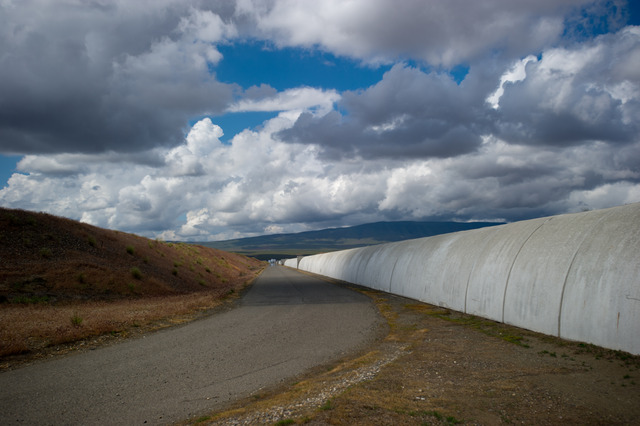 Access road next to one of LIGO Hanford’s concrete-encased vacuum tubes. The mid-station is barely visible 2 km away. (Credit: Kim Fetrow/Imageworks)

Second, LIGO is the opposite of round. Since LIGO doesn’t need to collect light from stars or other objects in the Universe, it doesn’t need to be dish-shaped like telescope mirrors or radio dishes, which collect and focus electromagnetic radiation to produce images. Rather than having ‘eyes’ typical of astronomical observatories, LIGO really has ears consisting of two straight and level 4 km (2.5 mi.) long steel vacuum tubes, 1.2 m in diameter, arranged in the shape of an “L”, and protected by a 10-foot wide, 12-foot tall concrete enclosure that protects the tubes from the outside world. (See photos at right.)

These are the three most prominent physical differences between LIGO, a gravitational wave observatory, and astronomical observatories.