Cornell University researchers have developed a new lightweight and stretchable material with the consistency of memory foam that has potential for use in prosthetic body parts, artificial organs and soft robotics. The foam is unique because it can be formed and has connected pores that allow fluids to be pumped through it.

The foam starts as a liquid, so researchers can pour it into a 3D printed mould in order to form the heart, adding appropriate valves to the finished structure. This means the organ could in theory be designed to perfectly match the shape and structure of the real heart it is replacing, allowing organ transplants to be tailored more effectively to their recipients. The polymer foam can be poured into a mold to create shapes and because of the pathways for fluids, when air or liquid is pumped through it, the material moves and can change its length by 300 percent. Led by Rob Shepherd, assistant professor of mechanical and aerospace engineering at Cornell, the research team created an artificial heart out of the foam, which proved to be unique due to its ability to pump fluid and contract easily.

The researchers used carbon fiber and silicone on the outside to fashion a structure that expands at different rates on the surface to make a spherical shape into an egg shape that would hold its form when inflated. “We decided to use a heart as an example because it’s a very complex shape, and it’s a machine that everyone’s familiar with, so by making a machine that looks like a heart that pumps like a heart, we thought it would demonstrate our material’s capability the best,” Shepherd explained in the video. “It turns out, people are actually very interested in using it as a heart replacement or even an assistant machine to a heart.”

The researchers are now working on developing a prosthetic hand with the material, though it will take some time for the polymer to be approved and tested on a federal level. “This paper was about exploring the effect of porosity on the actuator, but now we would like to make the foam actuators faster and with higher strength, so we can apply more force,” Shepherd said in the press release. “We are also focusing on biocompatibility.”

The material itself was in part selected because of its potential to get approval for use in humans by the FDA, the US’ medical regulatory body. However, the organ will have to be advanced somewhat before it can begin the lengthy approval process, which is likely to include trials in both animals and humans. In the shorter term, the material also has applications outside the body, particularly in prosthetics, where there are less approval factors to consider given the device would be outside the body, not in it.

Given the memory foam-like nature of the material, prosthetics made with the foam could well be more comfortable than many of their current counterparts. There is also thought to be potential for the material in soft robotics, where are the subject of considerable research thanks to their safety benefits during human interaction. 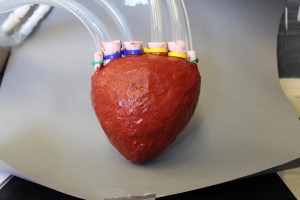