Researchers from MIT’s Computer Science and Artificial Intelligence Laboratory (CSAIL) have made a breakthrough in the field of 3D printing, developing a 3D printer prototype that is able to print up to 10 different materials simultaneously onto a single object.

Delivering resolution at 40 microns or less than half the width of a human hair, the “MultiFab” system is the first 3-D printer to use 3-D-scanning techniques from machine vision, which offers two key advantages in accuracy and convenience over traditional 3-D printing.

MultiFab can self-calibrate and self-correct, freeing users from having to do the fine-tuning themselves. For each layer of the design, the system’s feedback loop 3-D scans and detects errors and then generates so-called “correction masks”.

This new MultiFab also gives users the ability to embed complex components, such as circuits and sensors, directly onto the body of an object, meaning that it can produce a finished product, moving parts and all, in one fell swoop.

Other multi-material printers work via “extrusion” technologies, using nozzles that squirt out melted material that then hardens, to build an object layer-by-layer. Such techniques, while sufficient for certain uses, often lead to low-resolution finished items

There have been plenty of 3-D printers that have an array of materials at their disposal. But the MultiFab distinguishes itself not just through its low cost, but also the clever software it uses to achieve its results.

With MultiFab you simply put the components into the platform and the printer does the rest. Cameras automatically scan the components’ three-dimensional geometries and uses that information to print other objects around them.

A central computer is told what the user wants to create. While running the printing software, the computer receives views of what the printed object looks like, sent from a 3D scanner within the 3D printer, using a technology, known as machine vision.

The 3D geometry data sent by the scanner gives the 3D printer’s computer the ability self-calibrate the machine and to self-correct any mistakes. The computer is then able to adjust the printing process and decide which materials need to be printed onto the object, for example, a circuit board.

The user can also take specialized components and insert them into the machine, where they will then be added to the object, and the computer is clever enough to then continue printing around these added components to incorporate them into the final product.

The researchers have used MultiFab to print everything from smartphone cases to light-emitting diode lenses and an array of applications in consumer electronics, microsensing, medical imaging, and telecommunications, among other things.

They plan to also experiment with embedding motors and actuators that would make it possible to 3-D print more advanced electronics, including robots.

The platform opens up new possibilities for manufacturing, giving researchers and hobbyists alike the power to create objects that have previously been difficult or even impossible to print. 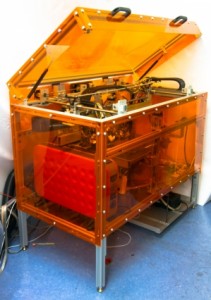