LitCoat has introduced a paramagnetic electroluminescent paint, able to be used on cars, bicycles, and a vast array of other surfaces, and this is paint that can change color by simply bringing it into contact with an electric charge. The change which occurs when the paint is in contact with electricity and turns a different color is called electroluminescence, and electroluminescence also provides the surface with the ability to give off its own light.

A paramagnetic electroluminescent surface can change between many different colors depending on the charge it is receiving, and it all starts with a base coat of a material called ELfarbe. ELfarbe is completely environmentally friendly, and it can be thought of as a nanocomposite polymer binder system. ELfarbe is a tough film that makes for the perfect layering base, and this layering is a necessity when creating a paramagnetic electroluminescent surface area.

This base can be painted on with a brush, and it works on a myriad of surfaces, including a simple piece of paper. As the material goes through a drying process, it bonds together to create a tough film through shrinkage, and this bonding process is what creates an ideal condition for electroluminescence.

ELfarbe is considered to be the ideal material in carrying electroluminescent paint layers, most easily allowing a user to create a desired paramagnetic effect. Because ELfarbe has no current or additional ingredients deemed to be hazardous to a user’s health or the environment, it is also considered to be a perfectly safe layering material.

Paramagnetic electroluminescent paint is within research and development on a nearly constant basis at this time, so while ELfarbe may be the go-to base coat material as of now, new and improved materials are constantly emerging. The method to create a paramagnetic surface representing more than one color is a simple one, and it follows a process of:

By following this layering process, a person will be able to paint their particular surface to show multiple colors of electroluminescent paint when it comes into contact with different charges.

Once the different paramagnetic layers are applied to a surface, a person can then charge the layers simultaneously or alone to achieve their desired color effect. The LitCoat formulated EL pigment is what provides the ability to create a multi-layered and multi-colored surface structure, and forming a particular paint layering combination will often take some trial and error on the behalf of the user. Because this is a highly skilled process that can become time consuming, the brand LitCoat recommends it is tried by painting professionals with an understanding of LitCoat and paramagnetic painting.

Colour-changing Chameleon nano paint can change to the weather or whatever shade you desire using a smartphone.

Your decorating decisions may be about to get a lot easier thanks to a colour-changing wall paint that can transform according to the weather or at the touch of a smartphone. The Chameleon paint has been developed by scientists at the Shenzhen Institute of Advanced Technology in China and could be the best thing in interior design since Willy Wonka’s lickable wallpaper.

The bright idea uses controllable nano cells, or crystalline micro beads, that can be inflated or deflated to deflect natural light at different wavelengths to produce an array of different colours picked up by the human eye. Each cell contains a metal core, which will shrink the size of the cell, pulling its shell inward, when an electric current is passed through it or in reaction to temperature.

On cold, dreary days you could be cheered up as the lower room temperature will cause the cells to react with rapid, psychedelic shifts in hue. Alternatively, on warmer days they could produce cooler tones in response to the heat. The photonic diffraction that occurred as the team experimented on the cells produced shifts from magenta to green and dramatic blues.

The nano cells transform shape to produce different colours according to Dr Xuemin of Shenzhen Institute of Advanced Technology.

Besides reacting to the weather you could control the colour of your walls to your heart’s content using a smartphone. If you’re bored of looking at magnolia or worried that lime is a little bit too luminous, you could simply change it in seconds by manipulating the electric current passing through the paint.

The team explained the hardest challenge they faced when trying to make the paint was manufacturing the tiny nano cells, which are several hundredths the diameter of a human hair. However, after working with chemical companies they are now able to produce several litres of paint per day. 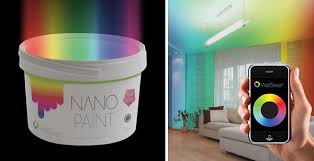