Pancreatic cancer is one of the most deadly of all human cancers, and its incidence is increasing. A combination of two drugs, one already approved by the Food and Drug Administration, appears to be effective at shrinking pancreatic cancers in laboratory mice, according to a new study by researchers at the Stanford University School of Medicine.

The drugs, which affect the structure and function of the cancer cell’s DNA rather than the activity of its proteins, also slowed the growth of human lung cancer cells in mice.

The study clarifies the potential of these types of drugs for treating diseases. The researchers hope to soon test the drug combination in humans with pancreatic cancer.

The cause of the disease seems to be a mutation in a gene called KRAS, which makes a protein that is essential for many cellular functions. Although this protein, and others that work with it in the Ras pathway, would appear to be a perfect target for therapy, drugs that block their effect often have severe side effects that limit their effectiveness. When used together, two drugs that affect the structure and function of DNA blocked the growth of pancreatic tumor cells in mice.

Researchers decided to investigate drugs that affect the DNA rather than the proteins. Usually, most DNA in a cell is tightly wound around special packaging proteins called histones, like thread on a spool. In this state, the genes on the DNA are inaccessible to a cell’s protein-making machinery. But chemical tags called acetyl groups induce histones to relax their grip and allow access to the DNA to permit gene expression, the cell carefully coordinates the addition and removal of these tags to histones. This expression is facilitated by special proteins that can read a histone’s acetyl status. This kind of modification of DNA-associated proteins, as well as of other tags on the DNA itself, helps a cell produce the right proteins at the right times in development and allows it to respond nimbly to its environment. These dynamic modifications are called epigenetics, and they’ve been shown to be increasingly important in many disease processes.

Researchers wondered whether tinkering with a cell’s epigenetics could control the growth and proliferation of pancreatic cancer cells without causing many of the deleterious side effects seen by drugs that inhibit protein members of the Ras pathway, a cellular signaling cascade that controls cell growth, development and survival.

They started by investigating the effect of a small molecule they called JQ1 on the growth of human pancreatic tumor cells in a laboratory dish. JQ1 inhibits a family of proteins responsible for sensing acetyl groups on histones. They found that the cells treated with JQ1 grew more slowly and displayed fewer cancerous traits. The molecule was also able to significantly shrink established pancreatic tumors in mice with the disease. However, it did not significantly affect the animals’ overall likelihood of survival.

When the researchers investigated the effect of JQ1 treatment more thoroughly, they found that it inhibited the expression of a gene called Myc, which is known to be associated with many types of cancers, including pancreatic cancer. It also decreased the levels of inflammatory molecules known to be involved in the development of pancreatic cancer.

The effect of JQ1 treatment was OK, but not amazing so they decided to look for drug combinations that might have a synergistic effect.

They tried eight drugs in combination with JQ1, each targeting either a known cancer-associated pathway or a step involved in epigenetics.

The drug that worked best was another epigenetic drug called vorinostat

On its own, vorinostat didn’t work very well, but when combined with JQ1 it showed a very strong synergistic effect in both the laboratory mice with pancreatic cancer and in pancreatic cancer cells from people with the disease.

Vorinostat works by inhibiting a family of proteins that remove the acetyl groups from histones. It has been approved by the FDA for use in people with recurrent or difficult-to-treat cutaneous T cell lymphoma.

When human pancreatic cancer cells were treated simultaneously with JQ1 and vorinostat, the cells grew more slowly and were more likely to die.

Mice with established pancreatic cancers treated with both of the drugs showed a marked reduction in tumor size and a significant increase in overall survival time. Their tumors showed no signs of developing a resistance to the treatment, and the mice did not develop any noticeable side effects.

They then tested the effect of the combination treatment on a type of lung cancer that, like pancreatic cancer, is driven by mutations in KRAS and found that together JQ1 and vorinostat also significantly increased the survival of mice with this cancer, called lung adenocarcinoma.

The researchers are now working to learn more about how JQ1 and vorinostat synergize on a molecular level. They found that the combination treatment led to a significant increase in the production of a protein called p57 in the cancer cells. P57, also known as Kip2, blocks cells from dividing. Mutations in p57 have been implicated in cancer development in humans.

The next step they used was a unique genome-editing technique called CRISPR to eliminate the expression of p57 in the pancreas of an adult mouse and showed that, in its absence, treatment with JQ1 and vorinostat was much less successful at inducing cell death.

The researchers hope that this newly identified combination treatment can be tested in the clinic within the next five years. The fact that vorinostat is already approved for use in humans may speed the process. They’re also interested in learning whether the treatment may be effective in other types of conditions.

They don’t know as yet whether this synergistic effect is specific to cancers driven by mutations in KRAS or if it could also work on other types of cancers. 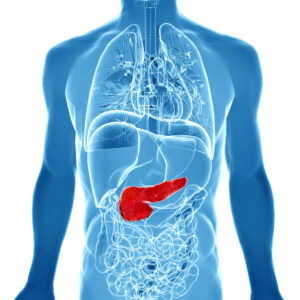