The Space Foundation’s international Space Certification program has added a new technology. ORBITAL SYSTEMS’ “Shower of the Future” shares the same water purification technology that NASA uses in space. As one of many components in a larger closed loop system, ORBITAL SYSTEMS has modified and brought forward a new solution that makes the system commercially suitable for Earthly water applications for non-potable use. It is manufactured and supplied on demand to ORBITAL SYSTEMS made in the U.S.

What began as an academic joint project between Mehrdad Mahdjoubi, ORBITAL SYSTEMS’ CEO and Founder, and NASA’s Johnson Space Center in Houston has since evolved into a young and growing company. The project was led by the Habitation and Exploration Missions and Systems Office at NASA/JSC, together with the School of Industrial Design at Lund University in Sweden, and was focused on bringing forward design concepts relevant for Mars missions.

The shower is available for preorder from Swedish company Orbital Systems. Designed with some assistance from NASA, the shower aims to both purify and recycle water.

When you start up the shower — which comes either as a standalone cabinet or a floor-integrated version — the closed system fills with 5 liters (about 1.3 gallons) of water. That water then flows out of the showerhead, over your body and down into a special drain filled with two filter capsules: a micro capsule and a nano capsule. 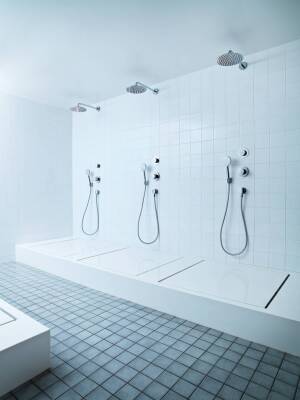 The micro capsule eliminates larger particles from the water stream like skin flakes, sand and hair particles, while the nano capsule eliminates smaller contaminates such as germs, metals and emulsified oils and makes the water cleaner than what comes out of most home taps, according to Orbital Systems. Once filtered, the water is pumped back up to the showerhead. So you basically get a closed loop of water that will let you shower for as long as you want (providing that’s not until all the water evaporates),” the report continued.

With support from Small Business Innovation Research (SBIR) funding from Johnson Space Center, Argonide Corporation tested and developed its proprietary nanofiber filter media. Capable of removing more than 99.99 percent of dangerous particles, such as bacteria, viruses and parasites, the media was incorporated into the company’s commercial NanoCeram water filter and inducted into the 2005 Space Technology Hall of Fame.

Built on a unique approach to recycling water in domestic applications, ORBITAL SYSTEMS strives to set a new higher standard for domestic water consumption. The team is supported by an advisory board which includes current Systems Engineer at NASA, Larry Toups, designer and professor Claus-Christian Eckhardt and Skype founder Niklas Zennström, who is also an investor in the company.