GoTenna is a solution for off-the-grid travelers who need low-cost connectivity for their smartphone which does not rely on satellites.

The latest invention by a Brooklyn-based hardware startup, GoTenna has a modified, smartphone app-based approach for staying in touch at a lower cost when cell service is shaky. This requires no satellite connection.

Most of us are fully addicted to our smartphones and when we find ourselves without Wifi or data service, our most direct connection to everything becomes almost useless. That’s where GoTenna comes in.

The device, a thin 2-ounce wand that can be strapped to a backpack or belt loop, connects to a smartphone app via Bluetooth low energy (LE).

Slide out the antenna and power on the device and you’ll then be able to send messages and GPS coordinates from your smartphone to others connected to a GoTenna.

What it does is create a low-frequency radio wave network for its iOS and Android app that can last around 1 mile in skyscraper-filled urban areas, but up to 9 miles in most outdoor situations like hiking and camping.

If you’re climbing or, say, out skiing, it shoots from 9 miles to as high as 50 miles once you start ascending to higher elevations.

The idea is to allow text messaging both between fellow off-the-gird participants and someone located within the net of reliable cell service in the case of an emergency.

There’s also a function, called Shout that lets you transmit information to any GoTenna devices in range.

Messages are end-to-end encrypted and not stored anywhere. They also can be set to self-destruct once the recipient reads it. You also get delivery confirmations.

The experience of using this should be the same as a messaging app on your smartphone.

A GoTenna can last up to a year and a half on a single charge if it remains off, and its lithium-ion battery will last for 72 hours of occasional use.

GoTenna isn’t aimed solely at off-the-grid trips like hiking and camping.It has other uses like traveling abroad without a dedicated SIM card, attending large-scale events like concerts and sports matches, and during natural disasters that leave cell service crippled and unreliable.

Messages and locations are sent through GoTenna’s own app that offers entirely offline maps and full messaging capabilities.

GoTenna users have the option to send private messages to a particular user or group of users, but there’s also a system in place for emergency situations

In case of an emergency, you can send a “shout” to all GoTennas within range that will alert all GoTenna users that you needs help.

Depending on location, GoTennas can actually create a fairly sizable network, with ranges up to 50 miles in some places. In the city, however, surrounded by rock and steel and concrete, the GoTenna can only communicate within a few mile radius.

Obviously, this can be used when you’re off the grid, at a festival or concert where there’s too much volume on the network, or traveling abroad.

According to the company, the GoTenna will last around 72 hours with intermittent use, and around 30 hours if it’s on 24/7. When turned off, it can hold a charge for more than a year 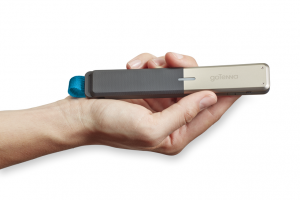