With support from the National Science Foundation (NSF), optical scientist Nasser Peyghambarian and his team at the University of Arizona are working to make next-generation holograms possible.

Researchers have developed a system that can render an image in near real-time and update the image every two seconds for Hologram.

Holo-TV is essentially a real-time, moving hologram, calculated and rendered by the bending (diffraction) of laser light on the fly. And while your knowledge of Holo-TV may be confined to Star Wars, it’s been used in laboratories for some time now – but bulky, expensive display systems have remained immobile and lab-dependent for more than two decades.

In 2008, the same team presented an updateable holographic 3D display that was capable of recording and displaying images every few minutes. The display could then last for several hours without needing to be refreshed, but was sensitive to ambient noise (vibration and air turbulance), as well as thermal expansion, and so needed to be fully enclosed on an air damped optical table.

The new technology features a quicker refresh rate (two seconds) and thus no longer needs to last for several hours without refresh. 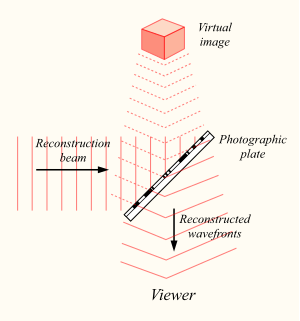 In order to create this quickly-refreshing holograph, the team uses 16 regular cameras to focus on a single object. The images are then sent, via Ethernet, to a computer, which reconstructs them into a 3D holographic image. The computer sends this information to a 50Hz nanosecond pulsed laser, which shoots holographic pixels called hotels onto a plastic screen (or “photorefractive polymer material”). The screen reacts to the laser and stores the image.

This new technology can now refresh at a much quicker rate–it’s a combination of the laser (which is now much quicker, with pulses in the nanosecond range), and the new screen (which is optimized for sensitive exposure, instead of durability) so that 3D–holographic–TV are now possible.

The quality of a real-time holographic imagery is primarily determined by the integration two major factors: