Study Investigates How Men and Women Adapt Differently to Spaceflight

In 2011, a report from a National Academy of Sciences’ decadal survey emphasized the need to examine and understand the influences that sex and gender have on physiological and psychological or behavioral changes that occur during spaceflight. In response, NASA and NSBRI assembled six workgroups to investigate and summarize the current body of published and unpublished human and animal spaceflight research data. The groups focused on cardiovascular, immunological, sensorimotor, musculoskeletal, reproductive and behavioral implications on spaceflight adaptation for men and women. In June 2013, NASA and NSBRI hosted a virtual workshop to present the groups’ findings. The Journal of Women’s Health published the manuscripts in the Nov. 2014 issue, available here. 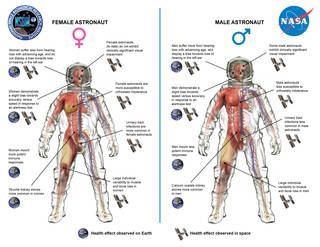 As NASA sets its sights on longer-duration spaceflight deeper into the solar system, the health and safety considerations for its astronauts grow increasingly complex. The agency, in partnership with the National Space Biomedical Research Institute (NSBRI), is researching risk-reducing countermeasures and developing technologies to advance human health and ensure operational performance in deep space. Together they are investigating personalized medicine for astronauts who may spend years living and working autonomously away from planet Earth.

A key consideration in personalized medicine is the crewmember’s sex and gender. Although in recent years the definitions have become more nuanced in the clinical community, “sex” is defined here as the classification of male or female according to an individual’s genetics and “gender” refers to a person’s self-representation as male or female based upon social interactions. We know that on Earth, major components of the human body are influenced by sex and gender factors. Taking gravity away from the equation imposes an entirely new element on our understanding of the health implications of sex and gender differences.

“Fortunately, we have the International Space Station,” said Dr. Marshall Porterfield, Director of Space Life and Physical Sciences Research at NASA Headquarters. “Station provides us with years of biological data on male and female astronauts, and many of them continue to participate in ground-based studies to evaluate the lasting effects of spaceflight.”

Much of this data is available to the public through the Life Sciences Data Archive (LSDA) and the Lifetime Surveillance of Astronaut Health (LSAH), but there is an imbalance of data available for men and women, primarily due to fewer women who have flown in space.

The “Impact of Sex and Gender on Adaptation to Space” is a compendium of the work groups’ six individual manuscripts, an executive summary, and a commentary.  It is the most current, comprehensive report on sex and gender differences related to human physiology and psychology in spaceflight and on Earth.

Each workgroup included scientists and clinicians from academia, NASA or NSBRI, and other federal agencies and was co-chaired by one representative from NASA or NSBRI and one from the external scientific community. The groups identified certain sex- and gender-related differences that impact the risks and the optimal medical care required by space-faring women and men. It represents innovative research in sex- and gender-based biology that impacts those individuals that are at the forefront of space exploration. 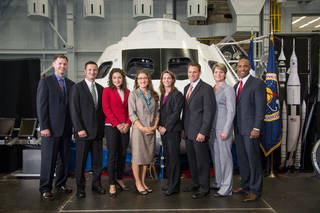 “This is the first major integrated examination of the issues of sex and gender in relationship to space exploration,” said Dr. Mark Shelhamer Chief Scientist for NASA’s Human Research Program at Johnson Space Center. “There are, in many cases, sex-based differences in the response to the stressors of space flight.” He believes that is important to recognize—not ignore—such differences, and to provide countermeasures that are appropriate for each subpopulation or even to each individual.

A summary of the Sex & Gender work groups’ major findings is listed below:

The full compendium is available at http://online.liebertpub.com/toc/jwh/23/11.