Numbers is an under-the-sea themed game where players have to come up with equations that equal a given integer using physical tiles. If they are successful, a trapped fish is freed from a bubble.

As numbers appear on the iPad’s screen, players use physical number tiles in front of the iPad to create an equation to reach that integer. Its under-the-sea themed adventure tasks players with solving a series of increasingly complex math challenges. Once you hit the number, the bubble pops and the fish is released.

In Osmo Numbers there is no right way to reach an answer, players can use any combo of numbers, or operations. This game has been designed to foster this freestyle thinking in kids and make it fun to truly understand.

The launch of a Numbers game hopes to revamp the unimaginative worksheets educators use to teach math now.

Though children increasingly have access to computers and iPads, the basic tool elementary students use to learn math hasn’t changed. The makers of Osmo think with this new game, they can change that.

Osmo first launched in 2013 as Tangible Play at Disrupt SF. Osmo is an accessory for iPad that allows children to play games with physical pieces outside the device.

The company creates games like Masterpiece, which allows children to trace an iPad image on a physical piece of paper, and Tangram, a game where players organize physical tiles so that they match an image on the iPad screen.

With Numbers, they hope to engage more children in math, particularly girls.

The low diversity numbers reported at tech companies have sparked a national debate about the lack of women pursuing careers in STEM fields.

This game helps create some carefree fun to math. 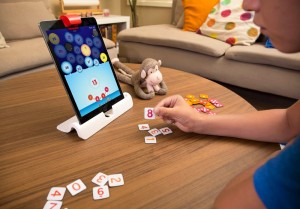