NASA officially has launched a new resource to help the public search and download out-of-this-world images, videos and audio files by keyword and metadata searches from NASA.gov. The NASA Image and Video Library website consolidates imagery spread across more than 60 collections into one searchable location. 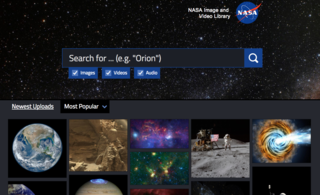 NASA Image and Video Library allows users to search, discover and download a treasure trove of more than 140,000 NASA images, videos and audio files from across the agency’s many missions in aeronautics, astrophysics, Earth science, human spaceflight, and more. Users now can embed content in their own sites and choose from multiple resolutions to download. The website also displays the metadata associated with images.

Users can browse the agency’s most recently uploaded files, as well as discover historic and the most popularly searched images, audio files and videos. Other features include:

NASA Image and Video Library’s Application Programmers Interface (API) allows automation of imagery uploads for NASA, and gives members of the public the ability to embed content in their own sites and applications. This public site runs on NASA’s cloud native “infrastructure-as-a-code” technology enabling on-demand use in the cloud.

The library is not comprehensive, but rather provides the best of what NASA makes publicly available from a single point of presence on the web. Additionally, it is a living website, where new and archival images, video and audio files continually will be added.

NASA astronaut Jack Fischer, who is making final preparations for an April 20 launch to the International Space Station, will be available for live satellite interviews from 8 to 9 a.m. EDT Tuesday, April 4. The interviews will air live on NASA Television and the agency’s website.

The interviews, from the Gagarin Cosmonaut Training Center in Star City, Russia, will be preceded at 7:30 a.m. by a video b-roll feed highlighting his mission training.

To participate in the interviews, media must contact Karen Svetaka at 281-483-8684 or karen.a.svetaka@nasa.gov no later than 3 p.m. Friday, March 31. Media participating in the interviews must tune to NTV-3. Satellite tuning information is available at:

Fischer, a native of Louisville, Colorado, will depart the next day for final pre-launch training at the launch site in Baikonur, Kazakhstan. He’s scheduled to launch on his first space mission April 20 from the Baikonur Cosmodrome on a Soyuz spacecraft with cosmonaut Fyodor Yurchikhin of the Russian space agency Roscosmos. They are scheduled to return to Earth in September.

Their flight plan calls for an arrival at the station six hours after launch. They will join Expedition 51 Commander Peggy Whitson of NASA, cosmonaut Oleg Novitskiy of Roscosmos and ESA (European Space Agency) astronaut Thomas Pesquet. The team will continue several hundred experiments in biology, biotechnology, physical science and Earth science currently underway and scheduled to take place aboard humankind’s only orbiting lab.

A U.S. Air Force colonel, Fischer was selected for NASA’s 20th astronaut class in July 2009 and completed training in 2011. He has been a Capsule Communicator and worked in the Astronaut Office supporting the ISS Operations, ISS Integration, Soyuz and Exploration teams.