Edward Via College of Osteopathic Medicine (VCOM) and Virginia Tech researchers who were using a disinfectant when handling mice have discovered that two active ingredients in it cause declines in mouse reproduction. Although the chemicals responsible for the declines are common in household cleaning products and disinfectants used in medical and food preparation settings, including hand sanitizers, academic scientists have never published a rigorous study, until now, on their safety or toxicity.

“It is likely that you have these chemicals in your house,” said Dr. Terry Hrubec, an associate professor of anatomy at Blacksburg, Virginia’s Edward Via College of Osteopathic Medicine and also a research assistant professor in the Department of Biomedical Sciences and Pathobiology at the Virginia-Maryland College of Veterinary Medicine. “The answer to the question, ‘Are these chemicals harmful to humans?’ is that we simply don’t know.” 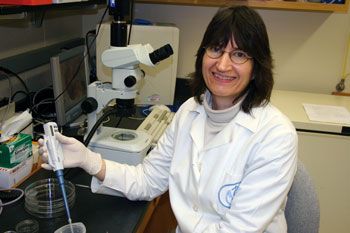 Hrubec and her research team at the veterinary college saw a decline in reproductive performance of her mice. Stumped by her initial findings, Hrubec noticed animal care staff in her laboratory wetting their hands with a disinfectant before touching the mice. This observation led her to a letter published in Nature by co-author Patricia Hunt, a geneticist at Washington State University, who had made the same discovery. These two independent observations were the impetus for the study. When Hrubec tested whether the disinfectant might be causing reproductive decline, she came up with the unexpected finding.

“These chemicals have been around for 50 years,” said Hrubec, “They are generally considered safe, but no one has done rigorous scientific research to confirm this.”

The two active ingredients in the disinfectant — alkyl dimethyl benzalkonium chloride and didecyl dimethylammonium chloride — are typically listed by their abbreviations, ADBAC and DDAC, on ingredient lists. They are a part of a larger class of chemicals called “quaternary ammonium compounds,” which are used for their antimicrobial and antistatic properties as well as their ability to lower surface tension between two liquids or a liquid and a solid. They are found in commercial and householder cleaners, disinfectants, hand sanitizers, preservatives in makeup and other cosmetics, fabric softeners, and dryer sheets.

“We just tested the two active ingredients in the disinfectant, not the entire class of compounds,” Hrubec explained. “To be on the safe side, we need to do more research on these chemicals and find out how they could be affecting human health.”

The research team found that the female mice took longer to get pregnant and had fewer offspring when they did. Forty percent of the mothers exposed to ADBAC and DDAC died in late pregnancy or during delivery. Graduate students Vanessa Melin and Haritha Potineni in the veterinary college’s Department of Biomedical Sciences and Pathobiology assisted with the study.

Hrubec drew comparisons between her research team’s work and similar research on bisphenol A, commonly known as BPA. In 1998, Washington State’s Hunt discovered the toxic effects of BPA, which could be found on baby bottles, medical and dental devices, and coatings on beverage cans, among other uses. Hrubec and Hunt are co-authors on the Virginia Tech study, which will appear in an upcoming issue of Reproductive Toxicology, a leading journal on the effects of toxic substances on the reproductive system.

“If these chemicals are toxic to humans, they could also be contributing to the decline in human fertility seen in recent decades, as well as the increased need for assistive reproductive technologies such as in-vitro fertilization,” Hrubec said.

Quaternary ammonium compounds like the ones used for the disinfectant in Hrubec’s lab were introduced in the 1950s and 1960s. Although some toxicity testing took place during this period, it was conducted by chemical manufacturers and not published.

“These industry-sponsored studies took place before toxicity studies were standardized,” Hrubec said. “In the 1980s, toxicity researchers developed and implemented Good Laboratory Practices, or GLPs. These are guidelines and rules for conducting research so that it is reproducible and reliable. All of the research on these chemicals happened before that.”

Although these chemicals are harmful to mice, Hrubec explained that they might not be dangerous for humans. But considering the widespread human exposure to the compounds through cleaning products and disinfectants, more research is needed to verify human implications. Hrubec noted that an epidemiological study could determine whether people who have a high rate of exposure to the chemicals, such as healthcare workers or restaurant servers, have a harder time becoming pregnant.

In addition to the Virginia-Maryland College of Veterinary Medicine and the Edward Via College of Osteopathic Medicine, the study received funding from the Passport Foundation, a San Francisco-based nonprofit that sponsors research on product safety.

The Virginia-Maryland College of Veterinary Medicine is a leading biomedical teaching and research center, enrolling more than 700 Doctor of Veterinary Medicine, master of public health, and biomedical and veterinary sciences graduate students. The college is a partnership between the land-grant universities of Virginia Tech and the University of Maryland. Its main campus in Blacksburg, Virginia, features the Veterinary Teaching Hospital and large animal field services which together treat more than 79,000 animals annually. Other locations include the Marion duPont Scott Equine Medical Center in Leesburg, Virginia, and the Gudelsky Veterinary Center in College Park, Maryland.