According to a recent report by the U.S. Geological Survey, male bass are experiencing sex changes due to chemicals that are found in most waterways across Northeast National Wildlife Refuges. Studies have found that up to 85% of male smallmouth bass in the region are demonstrating “characteristics of the opposite sex” – including eggs being located where testes should be.

This isn’t a one off – in fact, 27% of largemouth bass in the same region also show undesirable sex change indications. Meanwhile, an earlier report by Natural News states that tiny amounts of estrogen used in birth control pills is making its way into waterways and causing wild fish populations to collapse.

It is thought that the natural excretion of synthetic estrogen from birth control pills can be one of the leading causes of sex changes in fish, with male fish becoming feminized once they come into contact with the chemical. This causes them to produce the same hormones that female fish do and develop eggs where their testes should be.

The amount of estrogen needed to feminize male fish is thought to be very small, meaning that fish populations can drop quite dramatically after exposure to a small amount of the hormone.

As the rate of diabetes skyrockets in the United States, so too are prescriptions for the drugs that treat the blood sugar disorder. One of the most common Type II diabetes medication is metformin.

But metformin isn’t just being found on pharmacy shelves and private medicine cabinets. It’s also increasingly showing up in freshwater systems. Now, new research suggests it could be to blame for intersex fish.”
What is particularly alarming is that metformin is actually showing up in higher concentrations than caffeine.

“It is the chemical we found in almost every sample and in the highest concentrations compared to other emerging contaminants — even higher than caffeine…”
It has been scientifically proven in numerous research studies that fish have manifested radically altered physiology especially when living downstream from water treatment plants. Because metformin appears to act as a an endocrine disruptor, it is now being identified as a primary cause of the proliferation of intersex fish.

“Fish expressing combinations of male and female sex organs are increasingly common in waters downstream from water treatment plants. The phenomenon has mostly been blamed on hormone-related drugs like birth control and beauty products such as acne medicine.”
Another article under the title “What Are The Environmental Impacts Of Hormonal Birth Control?” has also explored the direct correlation between synthetic steroidal hormones showing up more and more in the water bodies and these same problems regarding fish health and physiology.

“In 2002, the United Kingdom’s Environmental Agency stated: ‘Estrogenic steroids — natural and synthetic hormones in sewage effluent — have been shown to be more potent than previously thought, with the synthetic steroid 17a ethinyl estradiol showing effects in fish at concentrations below 1 nanogram per liter.’ 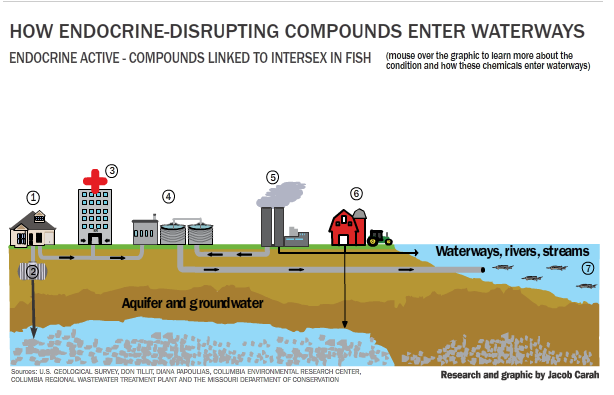