University of Illinois researchers developed a new approach, dubbed COMPASS that points directly to a protein’s likely structure using a combination of advanced molecular spectroscopy techniques, predictive protein-folding algorithms and image recognition software. Led by U. of I. chemistry professor Chad Rienstra, the team published its results in the journal Structure. “We’ve taken a process that would take months and brought it down to hours,” said Joseph Courtney, an Illinois graduate student and first author of the paper. “We expect this to not only accelerate the rate at which we can study proteins, but also increase its repeatability and the reliability of the results.”

Proteins carry out functions within the cell, and those functions are determined by the proteins’ precise structures, the way they fold and twist into an intricate three-dimensional shape. “Many diseases are caused by a protein that’s not acting correctly, or there is too much of it. If you can understand what the proteins look like, you can study how they work, and you can help design drugs and treatments for those diseases,” Courtney said. “A major benefit is that if you can design a drug to perfectly fit a single protein that cuts down on side effects, because it won’t interact with other molecules.”

One key method for determining a protein’s share is a technique called X-ray crystallography. However, many medically interesting proteins for example, the fibrils that characterize Parkinson’s disease do not form crystals, so researchers have turned to more advanced spectroscopic techniques. Those techniques require months to years of intensive data collection and analysis, taking numerous readings and measurements of the protein’s spectrum. The Illinois team saw an opportunity to take advantage of recent advances in structure prediction algorithms,computational models that generate numerous possible ways a protein could fold based on its sequence. “The major shortcoming of those modeling approaches is that they never know if they’re right,” Rienstra said. “It’s great to have models, but it still leaves thousands of possibilities. We need some type of experimental data to determine which is the right one.”

For COMPASS, the researchers rely on a single spectrum measurement using a spectroscopic technique called nuclear magnetic resonance, which gives a molecular “fingerprint” as no two protein structures have the same spectrum. The COMPASS platform looks at the possible structures generated by the predictive models, projects a spectrum for each one, and uses advanced image-recognition software to compare each projected spectrum with the spectrum collected from the experimental sample. “We call it COMPASS because we’re using a magnetic field to hopefully point us in the right direction of which protein structure is the right one out of all these options“. Rienstra said. The researchers compared COMPASS results of 15 proteins to the structure information determined from traditional methods, and found that COMPASS was successful in correctly determining the proteins’ structures.

The researchers hope that other chemists will adopt the COMPASS method. One advantage, Rienstra said, is that a chemist does not have to be an expert to use COMPASS, as the results from the algorithms are automatic, objective and repeatable. Rienstra’s group plans to use COMPASS in biomedical applications, hoping to study proteins that have thus far eluded researchers because of structural complexity and scarcity of samples. “We already have collaborators sending us samples to compare,” Rienstra said. “We’re working to compare the samples of a protein from Parkinson’s disease patients with the sample we study in the lab, to see if it’s the same in their brains as it is when we make it in the lab. That’s a very important question to address. The samples are very small and the signals are weak, but we can get one spectrum and see if the structures match. This would be impossible with traditional approaches because we would need brain samples a hundred times larger, and you just can’t do that with human patients.”

“The normal bottleneck of collecting and analyzing the data is now completely gone,” Courtney said. “What would be an entire thesis project for a graduate student can now be reduced to a day. And as the prediction algorithms get better, COMPASS will be able to take advantage of those advances to help find even more difficult protein structures.” 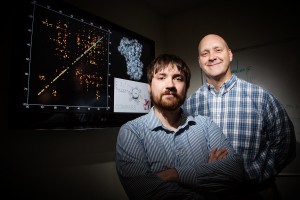