Termites build massive, empty structures above their underground nest in order to control their local environment.

Hunter King and Samuel A. Ocko, under the supervision of Applied Mathematics professor Lakshminarayan Mahadevan discovered the key to ventilation in the mounds of an Indian termite species.

It is well known that termites build such massive, empty structures above their underground nest in order to control their local environment. The researchers conducted tests on live and dead mounds in India using custom probes. They took temperature readings every day and night for several weeks. They revealed that the termites’ mounds drive a convection current, which helps the release of stale air from the underground nest to the surface of the mound.

The mounds are built around a large central chimney, which reaches from where the colony lives underground to the top. While the outside of the mound is relatively thin, the mound’s interior had much larger, structural walls. The researchers explained that the exterior was thinner to allow for the exchange of gases.

The temperature outside the mound is oscillating, and the termites have developed a method to harness that to ventilate their mounds.

During the daytime, the peripheral flutes heat up quickly as their thin skin of clay makes them more exposed to the ambient temperature, while the less exposed chimney stays cool as it has got a much larger thermal mass. During the nighttime the buttresses are cooler than the center because they cool down faster, making the center warmer.

According to King, the temperature gradient causes a convection current through the loop of tubes.

The cooler air sinks and the hotter air rises, leading to a circular movement of air through the mound both during the day and during the night that allows the gas from below to become released from the mound.

This remarkable work done by the termites can help engineers and architects think of applying these principles of passive climate control to create energy-efficient buildings. 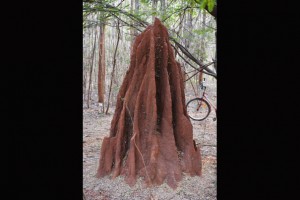