Lighting is something that we take for granted in the developed world, but there are still many areas around the globe where people lack reliable access to light at night. Around one-fifth of the world’s population has no access to electricity. They often use kerosene lamps, which contribute to indoor pollution and have to be refilled with oil regularly. Also they are bad for the environment and human health. To solve this problem, an engineering start-up called SALt(Sustainable Alternative Lighting) has developed a sustainable lamp that is powered by tap water and table salt!

Aisa Mijeno, an engineering professor who worked for years with Greenpeace Philippines, noticed during her work there that many indigenous people in the over-7,000 islands that make up the country were using kerosene lamps exclusively for lighting. The family she lived with there would have to climb down the mountain that they lived on and then walk an additional 30 km to the nearest town in order to get more oil to fuel their lamps. Mileno wanted to come up with a lighting solution that was both better for the environment and made the lives of the people better and easier. “A few of the common things noticed in marginalized island communities are the staple supplies of salt, water and rice. Almost all of the household we have been stationed in consist of these common elements in their homes.” With that in mind, she developed an LED lamp that runs on salt water, one glass of water and two tablespoons of salt to be exact. Mileno formed the Sustainable Alternative Lighting, or SALt Corp. to develop the lamp and come up with a way to get it in the hands of people around the world that needed it.

The SALt lamp stays lit for eight hours a day with the salt water concoction, or for coastal populations, sea water, and can run every day for six months until the anode wears out. If it is used in tandem with another light source or for less time every day, it will last for more than a year. The lamp uses the same science as that behind the Galvanic cell, which is the basis for batteries. The start-up said in changing electrolytes to a saline solution it makes the lighting non-toxic and a safer choice by removing the risk of fires from tipped over lamps and candles. It’s healthier for the people using it because the lamp doesn’t emit indoor pollution and the materials used are far better for the environment. The lamp can also be used in emergency situations as both a lighting source and an energy source for charging phones with a USB cable. 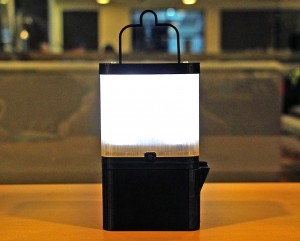