Solar power could be increased tenfold without additional storage in the near future.

A team of Harvard scientists and engineers demonstrated a rechargeable battery that could make storing electricity from intermittently available energy sources, like sun and wind which is safe and cost-effective for both residential and commercial use.

Much of the nation’s energy policy is premised on the assumption that clean, renewable energy, such as wind and solar power, will require huge quantities of storage to make a significant dent in greenhouse-gas emissions from electricity generation.

The new research builds on the earlier work by members of the same team that could enable cheaper and more reliable electricity storage at the grid level.

Harvard researchers wanted to improve on their 2014 flow battery. Their goal was to replace the conventional bromine-bearing electrolyte with something nontoxic. They want to deliver the first high-performance, nonflammable, nontoxic, noncorrosive, and low-cost chemicals for flow batteries.

In the new battery, electrons are picked up and released by compounds composed of inexpensive, Earth-abundant elements (carbon, oxygen, nitrogen, hydrogen, iron and potassium) dissolved in water. The compounds are nontoxic, nonflammable, and widely available, making them safer and cheaper than other battery systems.

The nontoxicity and cheap, abundant materials placed in water solution mean that it’s safe, it can’t catch on fire and that is an important point when you are storing large amounts of electrical energy anywhere near people.

This new battery chemistry was discovered by postdoctoral fellow Michael Marshak and graduate student Kaixiang Lin working together with co-lead author Roy Gordon, the Thomas Dudley Cabot Professor of Chemistry and Professor of Materials Science at Harvard. They combined a common organic dye with an inexpensive food additive to increase the battery voltage by about 50 percent over the previous materials.

Unlike solid-electrode batteries, flow batteries store energy in liquids contained in external tanks, similar to fuel cells. The tanks (which set the energy capacity), as well as the electrochemical conversion hardware through which the fluids are pumped (which sets peak power capacity), can be sized independently. Since the amount of energy that can be stored can be arbitrarily increased by scaling up the size of the tanks, greater amounts of energy can be stored at lower cost than traditional battery systems. Flow batteries store energy from renewable sources in liquid tanks filled with nontoxic organic chemicals.

The active components of electrolytes in most flow battery designs have been metal ions, such as vanadium dissolved in acid. The metals can be expensive, corrosive, tricky to handle, and kinetically sluggish, leading to inefficiencies.

Quinones are abundant, naturally occurring chemicals that are integral to biological processes such as photosynthesis and cellular respiration. While quinones in a water solution formed the negative electrolyte side of the battery, the positive side relies on a conventional bromine-bearing electrolyte that is used in several other batteries.

The high performance and low cost of the technology, holds the potential to provide scalable grid-level storage solutions to utilities.

Bromine’s toxicity and volatility make it most suitable for settings where trained professionals can deal with it safely behind secure fences. Their new battery replaces bromine with a nontoxic and noncorrosive ion called ferrocyanide.

Because ferrocyanide is highly soluble and stable in alkaline rather than acidic solutions, the Harvard team paired it with a quinone compound that is soluble and stable under alkaline conditions, in contrast to the acidic environment of the original battery they developed last year.

There are other advantages to using alkaline solution. Because it is noncorrosive, the flow battery system components can be made of simpler and much less expensive materials, such as plastics.

First-generation flow batteries were single-element couples, transition metals like vanadium or iron or chrome. Now we’re seeing the possibility of engineered molecules giving us the properties and attributes that we want in one complete system. More work is required and justified, but the Harvard team is really demonstrating the promise of next-generation chemistries.

Harvard’s Office of Technology Development has been working closely with the research team to navigate the shifting complexities of the energy storage market and build relationships with companies well-positioned to commercialize the new chemistries. 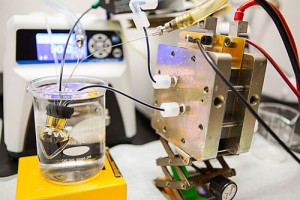