Kamen’s SlingShot (so-named after the Biblical David & Goliath story) device is an energy-efficient “vapor compression distiller,” and one possible answer to the safe water crisis. The SlingShot is designed to take virtually any unfit source of water, such as contaminated well water or seawater, and turn it into clean water, without requiring a filter (which regularly need to be replaced) or using any chemical additives (which have to be purchased). The device does use combustible fuel to power the Stirling engine inside, but the fuel source can be as diverse as cow dung, so it doesn’t require high-cost fuels to operate.

“The SlingShot machine is capable of producing roughly 1000 liters (250 gallons) of pure, distilled water every day, using only the power of a hairdryer. It is the size of a small college dorm refrigerator. Once installed in a remote village, it can supply the daily water needs for up to 100 people, providing drinking, washing and cooking water. With this clean water supply, general health conditions will improve instantaneously.”

A new documentary, aptly titled SlingShot, explores Kamen and his work toward solving one of our huge global challenges, and the film is described as “an inspiring portrait” of this modern-day Thomas Edison.

The issues for this potentially game-changing technology that addresses a very serious global problem remain ones of financing, mass production, and distribution, similar to what many other water solutions are facing, but a recent partnership between Kamen and his company (DEKA Research) and The Coca-Cola Company could help, as it will be bringing field trials of the device to areas of Paraguay and Ghana.

How the Slingshot Water Purifier Works. At first glance, the bright red shipping container that sits by the side of the road in a slum outside Johannesburg doesn’t look like something that could transform hundreds of lives. Two sliding doors open to reveal a small shop counter, behind which sit rows of canned food, toilet paper, cooking oil, and first-aid supplies. Solar panels on the roof power wireless Internet and a television, for the occasional soccer game. And two faucets dispense free purified drinking water to anyone who wants it.

Created primarily by Coca-Cola and Deka Research and Development, the New Hampshire Company founded by inventor Dean Kamen, the container is meant to be a kind of “downtown in a box”, a web-connected bodega-cum-community center that can be dropped into underdeveloped villages all over the world. Coke calls it an Ekocenter. Inside the big red box sits a smaller one, about the size of a dorm fridge, called a Slingshot developed by Kamen. Using a process called vapor compression distillation, a single Slingshot can purify more than 250,000 liters of water per year, enough to satisfy the needs of about 300 people. And it can do so with any water source, sewage, seawater, chemical waste, no matter how dirty.

Plenty of water-purification tools exist, of course, chlorine tablets, reverse-osmosis plants but they all have drawbacks. Either they’re not adequately portable, they require replacement parts that can be hard to come by or most vexing of all, they remove only certain kinds of impurities, leaving others to poison the unwitting. “There are nearly a billion people in the world that get up every morning and their primary goal is to find water,” Kamen says. “Many travel great distances to find water that won’t kill them. And sadly, hundreds of thousands of times a year it does kill, mostly kids.” With Kamen’s purifier, people could just stick a hose in their dirty laundry water, a polluted river, or even their own toilet pit, and crystal-clear, microbe-free water would stream out of the machine. Kamen, sees the current goals of the Coke partnership as the first step toward a much larger one. “Fifty percent of all the people in the developing world suffer from waterborne pathogens,” he says. “We’d empty half the beds in all the hospitals in the world if we just gave people clean water.” The Slingshot won’t be the solution for all of those people, Kamen says, but he sees no reason not to strive for that.

One way he might extend the reach of the Slingshot is to pair it with his energy-efficient Stirling generator, another longtime passion project. Rather than by internal combustion, a Stirling engine works by expanding and contracting a gas in a closed system by heating and cooling it. The engine in Kamen’s generator requires nothing more than waste, leaves, or some other flammable material for fuel. A test unit in Bangladesh ran for six months on cow dung. Combined with a Slingshot, the Stirling generator would enable the purification of water anywhere, regardless of access to the electric grid or a bunch of solar panels on an Ekocenter. This is crucial because many of the places that lack clean water also lack reliable electricity. Kamen has already established a relationship with NRG Energy, the same company that supplies solar panels to the Ekocenters, to discuss development. “We can bring base power to more than a billion people,” he says. That’s more than twice the number of people he could help with Slingshot alone and nearly a quarter of the global population. 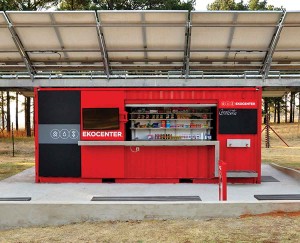 Open Source Strategy Forum (OSSF) is the only con...

ObjectivesThis course will help you: Devel...

Scale AI for our two-day, virtual conference....
View All