Dragon 2 (also Crew Dragon, Dragon V2, or formerly DragonRider) is the second version of the SpaceX Dragon spacecraft, which will be a human-rated vehicle able to make a terrestrial soft landing. It includes a set of four side-mounted thruster pods with two SuperDraco engines each, which can serve as a launch escape system (or launch abort system (LAS)) or be used for propulsive landings. Also, it has much larger windows, landing legs which extend from the bottom of the spacecraft, new flight computers and avionics, and redesigned solar arrays, all packaged in a spacecraft with a changed outer mold line from the initial cargo Dragon that has been flying for several years.

SpaceX’s Dragon 2, powered by eight SuperDraco engines thrusters, positioned around the perimeter of the vehicle in pairs called “jet packs”, fired up simultaneously to raise the Crew Dragon spacecraft for a five-second hover, generating approximately 33,000 lbs of thrust before returning the vehicle to its resting position. This test was the second of a two-part milestone under NASA’s Commercial Crew Program. The first test—a short firing of the engines intended to verify a healthy propulsion system—was completed November 22, and the longer burn two-days later demonstrated vehicle control while hovering.

SpaceX says it will be sending two paying customers on a trip around the moon and back in 2018. The Dragon 2 capsule will be their ride.

Elon Musk has revealed a plan to launch a Dragon 2 spacecraft on a circumlunar mission, with two paying customers. The launch, which will be conducted by a Falcon Heavy rocket in late 2018, is being seen as a major statement of intent by SpaceX, especially when NASA is conducting a study to launch a similar mission at least a year later.

SpaceX had planned to launch a mission to Mars – in cooperation with NASA – in 2018. Known as Red Dragon, the mission would have also involved a Falcon Heavy lofting a deep space Dragon 2 for a propulsive landing on the Red Planet. 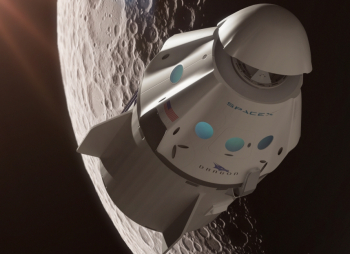 However, the mission has been refocused to 2020, the next optimal Mars transfer window, according to SpaceX President Gwynne Shotwell during a recent media event at KSC’s 39A.

NASA is changing the way it does business through its commercial partnerships to help build a strong American space economy and free the agency to focus on developing the next-generation rocket, spacecraft and systems to go beyond the moon and sustain deep space exploration.