A Dutch startup has unveiled plans to use robotic printers to weld the structure drop-by-drop in the first large-scale test of the technology. The company has unveiled plans to build the world’s first 3D-printed bridge across an Amsterdam canal, a technique that could become standard on future construction sites. Using robotic printers “that can ‘draw’ steel structures in 3D, we will print a (pedestrian) bridge over water in the centre of Amsterdam,” engineering startup company MX3D said in a statement. The plan involves robotic arm printers ‘walking’ across the canal as it slides along the bridge’s edges, essentially printing its own support structure out of thin air as it moves along. Specially-designed robotic arms heat the metal to a searing 1,500 degrees Celsius (around 2,700 degrees Fahrenheit) to painstakingly weld the structure drop-by-drop, using a computer programme to plot the sophisticated design.

“The underlying principle is very simple. We have connected an advanced welding machine to an industrial robot arm,” said the bridge’s designer Joris Laarman. “We now use our own intelligent software to operate these machines so they can print very complex metal shapes which can differ each time,” Laarman said of the project also involving the Heijmans construction company and Autodesk software. So far, the robotic arm has been used to print smaller metal structures, but the bridge will be the first ever large-scale deployment of the technology, MX3D spokeswoman Eva James said. It is hoped that the bridge will be a first step towards seeing the technique used on construction sites, especially those involving dangerous tasks such as on high buildings, she said. The technique also removes the need for scaffolding as the robot arms use the very structure they print as support.

The bridge will be designed by Joris Laarman. That process using new Autodesk software will be a research project in itself. It will sync with the technical development and take into account the location. The project is a collaboration between MX3D, design software company Autodesk, construction company Heijmans and many others. “I strongly believe in the future of digital production and local production, in “the new craft”. This bridge will show how 3D printing finally enters the world of large-scale, functional objects and sustainable materials while allowing unprecedented freedom of form. The symbolism of the bridge is a beautiful metaphor to connect the technology of the future with the old city, in a way that brings out the best of both worlds.” It’s the first time that Geurtjens and his colleagues are designing and building a bridge using this printing technology. Until now, the company was mainly using its robots to build free-form sculptures and giant pieces of furniture. But the bridge project, a collaboration between the startup, several larger companies and the Amsterdam City Council is a chance for MX3D to show that its version of 3D printing is extraordinarily useful for making all kinds of things in the real world.

MX3D’s robots aren’t anything like desktop 3D printers. The bots look like giant mechanical arms that end in a torchlike apparatus. Instead of printing objects inside a box, the bots build things out in the open. Their welding torches melt a layer of steel and then cover that layer with more molten steel, which comes from a piece of wire that is melted as it’s extruded by the robot. The MX3D robots can print in all directions. The bots turn their torches sideways to print an object that juts out from the middle of a wall, for example. This ability to print in any direction, and at such a large scale, is part of what makes MX3D’s technology revolutionary, Maurice Conti, director of strategic innovation at Autodesk, told Live Science. “One of the reasons that I’m so excited about this project is that it’s going to be a great demonstration of moving 3D printing into the real physical world and away from prototyping and tchotchkes,” said Conti, who noted that MX3D’s process is breaking down three of the biggest barriers that have kept 3D printing from becoming widespread as a full-scale manufacturing method, size, speed and cost.

“This is more foundational than a niche technology for a niche problem. I think that’s why this is such a big deal. It can be applied a very broad set of needs,” he added. In the future, you might even see torch-carrying robot arms building bridges for cars or trains. The bots could also be useful at sea, to fix offshore oil rigs, or in space, to repair broken satellites. But for now, Amsterdam is the only place you can see the mechanical welders in action. 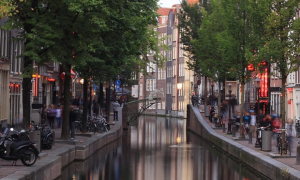