Riding horses in low light poses some obvious dangers, particularly in areas where they’re forced to share the road with drivers who could become easily distracted. Sadly, for Tail Lights creator Sami Gros, it took a near-tragedy to inspire a solution. “I was out riding my two horses with my best friend, and a car hit my friend and my horse. My friend was OK, but my horse suffered injuries that has made him unridable to this day,” Gros said. “I searched the internet for a product that would allow me to be seen for up to a half mile, and there was nothing out there. So I created one.”

After years of research and development, Tail Lights was born, saving an untold number of horses and their riders from injury, or worse. A more compact version of the previous Tail Lights Pro, the Tail Lights Rider System is based on a very simple concept. It consists of front and tail units with LED lights to warn any approaching motorist that there’s a horse on the scene. The front unit, which is diffused so as not to effect the horses’ vision, consists of a badge that clips to the breast collar or to the rider when bareback riding. Meanwhile, the tail unit is made of four strands of LED lights streaming down from, not surprisingly, the tail. The tail unit attaches to the base of the tail using a proprietary wrap. The system is controlled by a handheld remote that allows the rider to turn the lights on and off, set the light pattern, change the colors, or adjust the brightness. The tail unit can be adjusted to various colors, including pink, green, and red.

The system has strands of LED lights, on both the front and tail units that warn oncoming motorists there is a rider on the road. It may look like a fashion accessory, but the Tail Lights Rider System aims to save the thousands of horses and riders that are injured and killed each year in collisions. ‘I first created the Tail Lights PRO unit which is currently being used and/or tested by eight Mounted Patrol units in Canada and the United State,’ said Gros, CEO and founder of Tail Lights. ‘After seeing the success of this product, I decided to make a smaller more consumer version that was just as beautiful, but at a more affordable price.”

The Tail Lights Rider System has LED lights in the front and tail units, bright enough to be seen down the road. The front unit is diffused so the horse isn’t distracted and it comes with a badge that attaches to the breast collar or rider when bareback riding. There are four strands of LED lights stream down the tail unit, which attach to the base of the tail with proprietary wrap. It’s a wireless system and is controlled with a small hand held remote. The brightness, light patterns and colors can be easily adjusted to fit the rider’s preferences. There are six colors to choose from, red, blue, yellow, green, pink and white. Tail Lights Rider System will light for nine hours on a four hour charge. 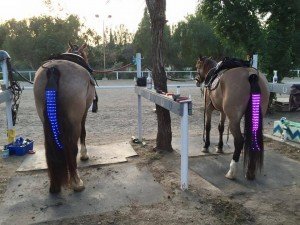