The holographic principle is a principle of string theories and a supposed property of quantum gravity that states that the description of a volume of space can be thought of as encoded on a lower-dimensional boundary to the region—preferably a light-like boundary like a gravitational horizon.

This could be thought of as rather like watching a 3D film in a movie theater. We see the pictures as having height, width, and depth—when in fact it all originates from a flat 2D screen. The difference in our 3-D universe is that we can touch objects and from our perspective, the projection is real.

A sketch of the timeline of the holographic Universe irregularities in the cosmic microwave background (the ‘afterglow’ of the Big Bang), A hologram is a recording of a light field – i.e. the 2D recording of a 3D pattern

Prof. Afshordi and his colleagues from UK, Canada and Italy, investigating irregularities in the Cosmic Microwave Background (CMB), the ‘afterglow’ of the Big Bang, have found there is substantial evidence supporting a holographic explanation of the Universe.

“We are proposing using this holographic Universe, which is a very different model of the Big Bang than the popularly accepted one that relies on gravity and inflation,” Prof. Afshordi said.

“Imagine that everything you see, feel and hear in three dimensions — and your perception of time — in fact emanates from a flat two-dimensional field,” explained co-author Prof. Kostas Skenderis, from the University of Southampton, UK. 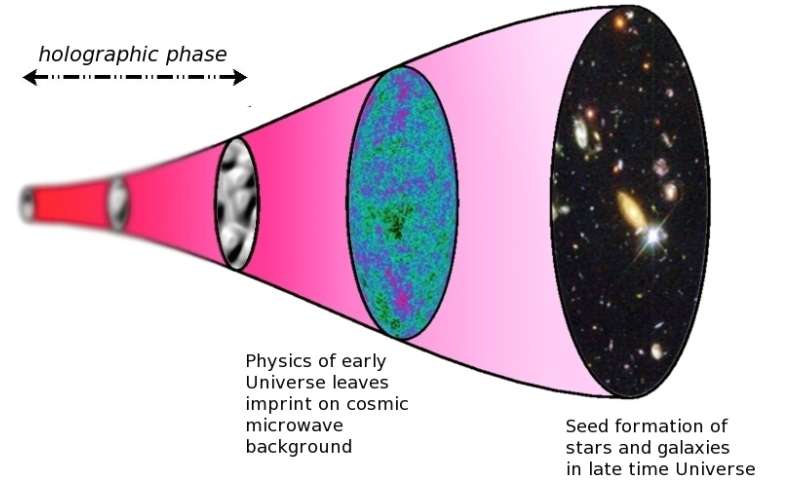 Entire universe is an illusion and reality is a 2D hologram. New study from a group of theoretical physicists and astrophysicists. Writing in the journal Physical Review Letters, scientists from the University of Southampton (UK), University of Waterloo (Canada), Perimeter Institute (Canada), INFN, Lecce (Italy), and the University of Salento (Italy) came to this conclusion while studying irregularities in the cosmic microwave background (CMB).

In recent decades, advances in telescopes and sensing equipment have allowed scientists to detect a vast amount of data hidden in the white noise or microwaves (which are partly responsible for the random black and white dots you see on an un-tuned TV) left over from the moment the universe was created. Using this information, the team of researchers made complex comparisons between networks of features in the data and quantum field theory. Impressively, they found that some of the simplest quantum field theories could explain nearly all cosmological observations of the early universe.

“Holography is a huge leap forward in the way we think about the structure and creation of the universe,” said Skenderis. “Einstein’s theory of general relativity explains almost everything large scale in the universe very well, but starts to unravel when examining its origins and mechanisms at quantum level.”

According to Skenderis, scientists have been working for decades to combine Einstein’s theory of gravity and quantum theory. Some believe the concept of a holographic universe has the potential to reconcile the two.